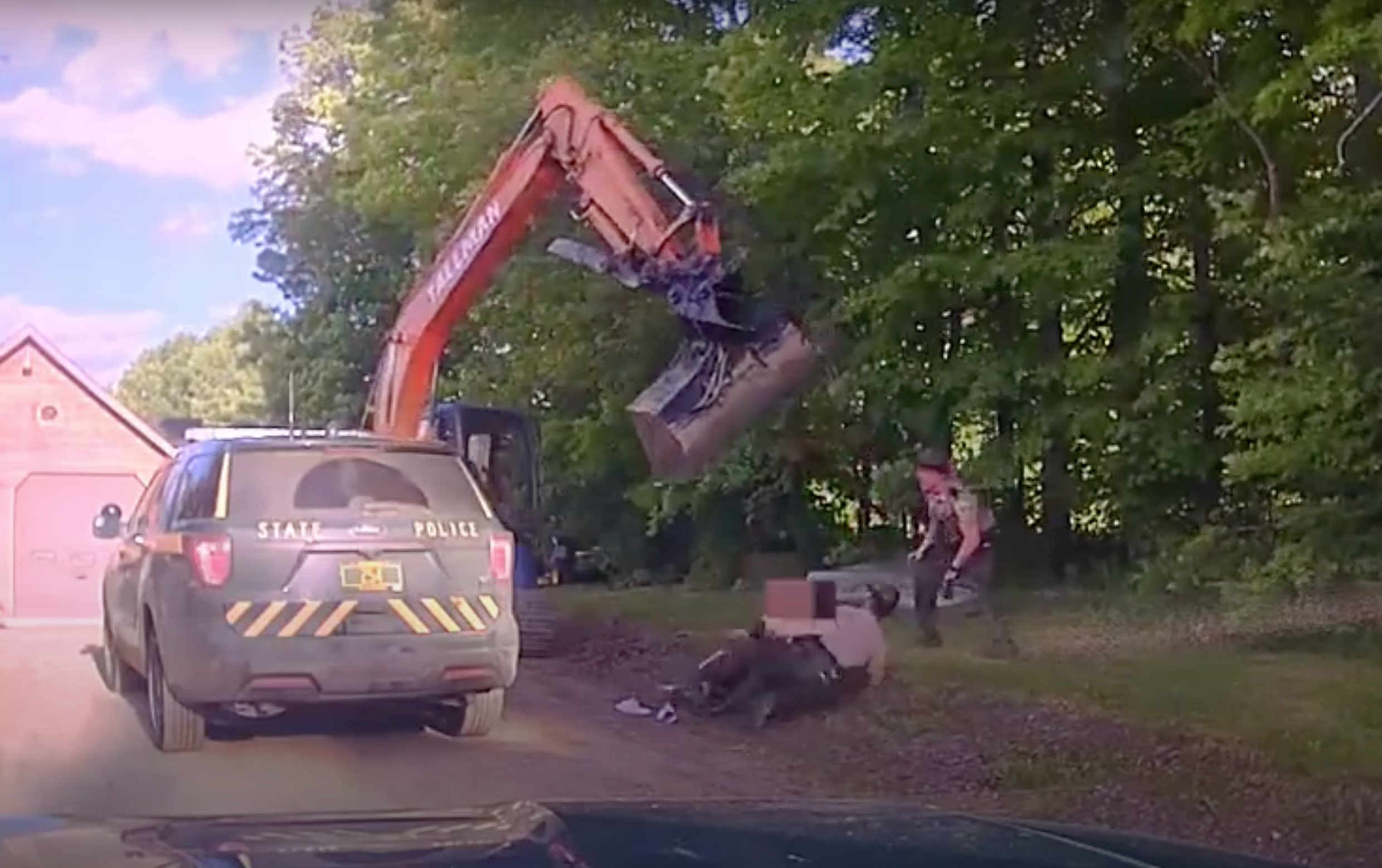 A Hardwick man accused of swinging the bucket of an excavator at two Vermont State Police troopers to keep them from arresting his son pleaded guilty to three felony charges in exchange for 90 days in jail.

Over the objections of the troopers involved in the incident, Judge Justin Jiron agreed to accept the plea deal between 52-year-old Wayne Tallman and prosecutors during a hearing Monday in Caledonia County Superior criminal court in St. Johnsbury.

The case attracted worldwide attention after Vermont State Police released cruiser dashcam video showing the excavator’s bucket swinging toward the troopers who were physically struggling with Tallman’s son as they tried to arrest him on June 14.

Both troopers spoke at the hearing Monday, detailing what they said was ongoing trauma they suffer due to the episode. The troopers, who had to dart away from the machine, said that the jail sentence was too short given Tallman’s dangerous conduct.

Trooper Gabriel Schrauf said no law enforcement officer could train for such an incident and that he has had to take part in counseling.

“In the event this happens again, we want to make sure it sets a precedent,” he said of his desire for a harsher penalty for Tallman. “There needs to be a message sent. This is not OK.”

The other trooper, Skylar Velasquez, told the judge that he replays the encounter in his mind multiple times every day. “It’s something that probably will continue to happen for many months, if not years,” Velasquez said.

Tallman pleaded guilty Monday to three felony charges: a single count of impeding a public official and two charges of aggravated assault with a deadly weapon — the excavator — which Tallman owned as the operator of an excavating company, according to Caledonia County State’s Attorney Jessica Zaleski.

Tallman had intially been charged with more offenses, including attempted second-degree murder.

The plea deal called for a sentence of two to four years in jail, all suspended on probation except 90 days to serve. Tallman has been jailed since his arrest in June and, with credit for time served, he could be released as early as this week.

The troopers encountered Tallman around 7 p.m. on June 14 on his property on Scott Road in Hardwick as they were trying to arrest his son, 24-year-old Brandon Tallman, for an alleged assault that took place a week earlier.

Wayne Tallman told Jiron, the judge, that he used the excavator to try to interfere with his son’s arrest.

Zaleski, the prosecutor, defended the plea agreement. She told the judge that Tallman had no prior criminal record and as a result of the plea agreement, he will now have three felony convictions, which she called a “pretty big hit.”

She noted that Tallman has been unable to work due to his incarceration.

“For a person who is self-employed, certainly it’s going to have a magnificent impact on him, his business and his entire family,” Zaleski said. “I did take that into consideration when thinking about the 90 days and the punitive portion of the agreement.”

David Sleigh, Tallman’s attorney, said in court that his client was willing to admit his culpability shortly after his arrest and sought to resolve the case to spare others, including the troopers, the need to “revisit” the incident.

Jiron said he accepted the agreement, in large part, because of its strict probation conditions, including that Tallman commit to 40 hours of community service and take part in restorative justice programming.

Also, according to the judge, Tallman can only operate an excavator under the supervision of a person approved by his probation officer, and that person providing supervision cannot be his son.

Stay on top of all of Vermont’s criminal justice news. Sign up here to get a weekly email with all of VTDigger’s reporting on courts and crime.